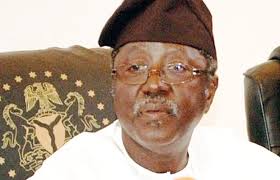 “God is a democrat, does not support rigging but if you rig and succeed, that means God approves of it.”

Yes, you heard that right from the mouth of the Plateau State governor whose action to declare himself chair of the Nigerian Governors’ Forum is “making dangerous waves” among Nigeria’s governors.

Jonah Jang described his self-declared “victory” over Gov. Rotimi Amaechi of Rivers State, whom he claims to have defeated to become the new “chairman” of the Nigerian Governors’ Forum, as the will of God.

Mr. Jang, was speaking in Jos, Sunday, at a special interdenominational church service held at Faith-way Chapel Church and organized by the Plateau State government as part of the activities marking the forthcoming 14th anniversary of uninterrupted democratic governance in Nigeria.

His remarks came two days after a controversial governors’ forum election in which Mr. Amaechi was declared winner after clinching 19 votes to defeat Mr. Jang who got 16. The result of the election however portrayed Mr. Jang as a usurper to the NGF chairman position.

Governors who supported Mr. Jang rejected the outcome of the elections, claiming it was rigged.

On Saturday, Mr. Jang convened a meeting of the protesting governors and presided as chairman.

“I can assure you that my emergence as the chairman Nigerian Governors’ Forum was the will of God because I went to Abuja for the NGF election not with the intention to contest but northern governors and the PDP governors’ forum endorsed my candidature. When (Ibrahim) Shema of Kastina stepped down, both forums insisted I should contest; I contested and won. So, it’s the will of God.”

Mr. Jang who said he had never wanted to be chairman of the NGF told the church that the allegation that a faction of the NGF rigged the elections in his favour was not true.

“God is a democrat, does not support rigging but if you rig and succeed, that means God approves of it.”

Mr. Jang called on Nigerians to pray for their leaders to enable the present administration at all levels succeed.

Get full gist from PremiumTimes.